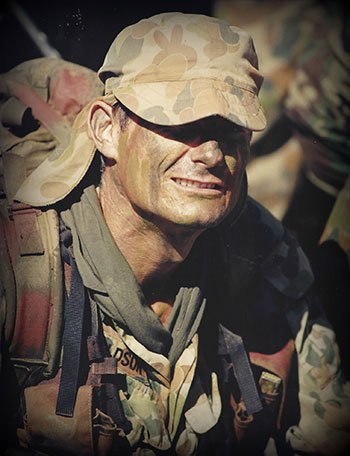 I am an Australian Soldier, an Aussie ‘Digger’. Have been since I was 17.5 years of age.

Still am and will always be.

I am proud to draw my lineage back to the beaches and hills of ANZAC Cove and Gallipoli. My ancestors fought on those bloodied hills and in the fields of France – I had three blood relatives that fought in the Great War that I am aware of. Two of them never made it back home, one was killed the day that the armistice agreement was signed in 1918. I also have a Great Grandfather who fought in the Boer War. I wear their medals with pride on my right chest next to my two unit Citations and my CDF Commendation and adjacent to my own medals worn on my left chest.

ANZAC Day is a sacred institution in our family. We have all suffered and sacrificed much in the service of this great nation. We attend the local Dawn Service and ANZAC Day Parade before heading into the city for the main march. After the march we typically end up in a prearranged RV (Rendezvous) to consume some ‘falling down water’ (aka beer) to commemorate all those that served and to celebrate the lives of those that made the ultimate sacrifice. I’ve personally lost over 23 friends and comrades over the years; some in combat; some in training; and some who decided that this world was too much and took their own lives. On Anzac Day we tell stories about how good we used to be and the stories getting better as each year passes!

And whilst it is right and proper to remember those that served and died for this country on ANZAC Day, it is equally important to remember and acknowledge the sacrifice made by the families of those that served and continue to serve. To the wives, husbands, sons and daughters, the mothers and fathers of our fighting women and men. It is this group who, day in day out, support our troops regardless of season, weather or time of day. They carry on life as normally as possible when their loved ones are deployed overseas and are in harm’s way. They do this in many cases with minimal contact from the serving member and with limited support at home. They don’t receive public recognition and acknowledgement; and they certainly are not awarded a chest full of medals!

It is the children that suffer most. They are the innocents in this not having knowingly chosen to have a Mum or Dad in the Military. The experience of not knowing if they will see their Mummy or Daddy again is real – especially when some of their friends have lost a parent in service.

This was the lot that my family endured for decades. It was a lot made all the more complicated and trying by virtue of my service in Special Forces; in the SAS. It was an arduous life for all involved. It took great resilience and effort to keep things on a relatively even keel. It took a superhuman effort by my partner to keep things going and to sole parent our two children so brilliantly well for the 9+ months of the year that I was away. She displayed great courage, resilience and an inner strength possessed by few! She also had lots of shitty times and didn’t know how she would get through the day let alone the next 6 months of my absence.

There were more than a few occasions when the pager or phone would go off in the early hours of the morning and I would have to leave the house very quickly in order to deploy. I would kiss the kids goodbye as they slept soundly in their beds, kiss Nicole goodbye and disappear into the night. She would be left to explain to the kids in the morning that Daddy had gone and that she didn’t know when they would see me again (or if, in fact, they would ever see me again!).

The family would not know where I had gone or for how long, such was/is the nature of work. Communication with home would be sporadic if at all and there would typically be many false alarms about homecoming dates before that wonderful day finally arrived. I remember one occasion  scribbling a quick letter in my Field Message Notebook in the Western Desert of Iraq during the invasion in 2003 so it could be taken back with a Spec Ops Chinook helicopter that had flown the Commanding Officer in for a short visit. It travelled via planes, trains and automobiles to eventually reach my wife in Australia – one of the few times I was able to get a message home on that particular five month deployment.

It is a lot that they faced with bravery and resilience that I would expect of to find on a battlefield…. In many ways it was a battlefield, one where there may not have been bullets flying but one where the ‘enemy’ was ever present; one where you dreaded every knock on the door in anticipation of the horrific news that may be waiting on the other side.

So this, and every ANZAC Day please think of all the Defence Force personnel deployed overseas and their families at home who face each day with an integral part of the ‘team’ protecting our way of life.

To my family, to Defence families across this great nation, I salute you all – Good drills. Out.