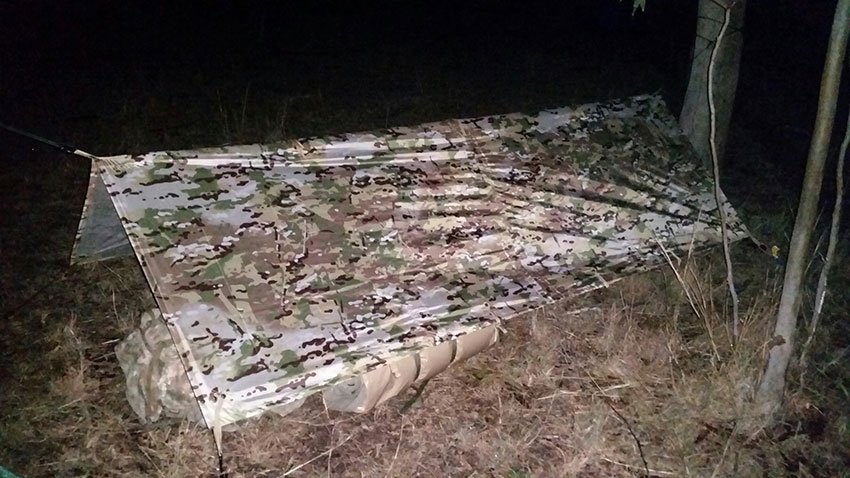 When we first considered this blog topic it was in the context of sleep. Upon further reflection however, we decided that we have spent many nights spent in unusual places that didn’t involve any sleep at all! Nights spent peering into the rain waiting for someone to walk along that jungle track or nights spent trudging through snow drifts in order to get home – one of was dressed in a showgirl costume and high heels, and it wasn’t me!

So here is the first in the blog series about ‘Unusual places to spend the night’. Enjoy!

It was a late winter’s afternoon and the sun was quickly disappearing below the horizon. The wind had picked up and the temperature had already began to drop; it was going to be another cold night. We had been watching the railway yard for most of the afternoon from our chosen OP (Observation Post) location, trying to work out the routine, the guard’s patrol patterns, how many people were onsite, what communications they had and, most importantly, which of the three trains in the yard was the one that would be leaving tonight.

There were four of us – a small team and we all knew each other well as we had been together for some time. We had minimal equipment; what we had on our person, belt order and our packs. We readying ourselves for a move after night fall – we had two up in the OP watching the rail yard and two back in depth providing rear protection and doing what preparation that needed to be done. Whilst the inhabitants of the rail yard were not aware of our presence, we weren’t invited guests and our discovery would only end in tears! Ours!

As the light faded we determined which train was tonight’s train. It was a ‘best guess’ and based our plans on that with some contingencies if it turned out to one of the other two in the station. We needed to get the right train as this was our ticket out here and the only other extraction/escape option we had was by foot and it was a very long walk!

Tonight’s train was a cargo train and we’d noticed that the boxes of cargo did not fully will the entire length of the open wagons and that there was a gap at the back of each wagon. It looked like this gap might be big enough for four people to hide in. So, the cunning plan was to sneak forward to a concealed location just short of the train and wait until the moments before it started to leave the station. At that point we would break cover and dash across the short distance of open ground to the train, throw our gear in the rear part of a wagon and jump in before the train was going too fast. Hopefully there would be enough room in that gap at the rear of the wagon for us all! We wouldn’t know until we had committed to boarding the train, by which time we would be exposed with a high chance of being discovered if we couldn’t get into the wagon and behind cover.

The sun had completely disappeared below the horizon and the last remnants of the day’s light were gone. It was a dark night and the temperature had also begun to plummet. It would be a cold and uncomfortable ride, if we made it onto the train. But as they say, a third class lift is better than a first class walk!

We cautiously edged our way closer to the train in search of a suitable hiding spot. The rail yard was sporadically lit with old fittings that produced beams of downward yellow light that illuminated the immediate area but didn’t throw much light beyond that. This worked to our advantage. Keeping to the shadows we got to within 15 meters of our target. We couldn’t get any closer as there was open ground between us and the train, so we found some old wooden crates to use as cover from observation.

The guards were patrolling more frequently now and shining their torches all over the place. Thankfully, most of their interest was on the train and not in our direction. This increase in activity was an indicator that the train’s departure was imminent. It was now almost 1900 (7.00pm) at night and we had been in the rail yard now for almost 4 hours.

The diesel train engine, which had been running for some time now, began to increase its revs. Suddenly it lurched forward taking up the slack between all of the cargo wagons creating loud clanks and bangs up and down the length of the train. This was it, we had to move now or risk missing our ride to freedom!

Two guards had decided that now was a good time to socialise next to the train about 30 meters to our left. Fortunately they were both facing slightly away from our location and with some luck they wouldn’t notice our dash across the 15 meters of open ground. We waited a few more seconds to see if they would move on, but they stayed. We had decided to move across the open ground to the train one at a time to minimise noise. However, as the train was about to pull out of the station that course of action would take too long, and it would increase the chances of being seen should the guards turn around. A change of plan was in order – we would all move together and rush across the gap as one group.

The train lurched forward again with a loud clank and started to move. It was now or never. ‘Move now’ was the call and we all got up and ran towards the train. Rushing across the open ground worked well. What didn’t work so well was all arriving at the back of the wagon at the same time and all fighting for space in between the slow moving wagons! It was a shit fight, but somehow we all managed to get on board and into the snug space at the back of the wagon…. just.

Hearts pounding and with heavy breathing we arranged ourselves to get as low down as possible. The train was moving a little faster now. We had made it! Or so we thought…. Then the train stopped… and then started to move backwards towards the station! Shit, we’d been sprung!

What we didn’t know was that this was normal for a goods train – they would move forward, take up the strain on the wagons, move forward a bit more picking up speed and then shunt back to the start point in order to check all the connections and lines between the wagons. At this point we didn’t know this and we expected a welcome party of angry railway guards.

We sat in silence as the train stopped back at its start point. Then came the footsteps of the approaching guards, stopping every so often to shine their torches in and around the train. There was one on each side of the train and they were heading our way!

The guards stopped right next to our position shining their torches all around and over our heads. Suddenly the left hand side guard jumped up onto the connectors in between our wagon and the one behind. I could see his head and shoulders clearly. He was facing rearwards and appeared to be checking the crates in the wagon behind us. He turned as he started to climb down and his torch shown straight onto us… thankfully he was too busy looking down to see where he was placing his feet to see what his torch beam had discovered!

They moved on and we breathed again…. Adrenaline was coursing through our bodies now in large amounts. Time seemed to stand still and it seemed like hours before we finally started moving again. This time the train driver tooted the whistle which meant we were on our way out of town! We all remained silent and motionless for several minutes before I stuck my head over the wagon’s edge to see that we were well and truly into the countryside.

We all let out a sigh of relief and started to laugh. We had made it, or so we thought! The night was still young and we still had some challenges ahead. But that’s another story….